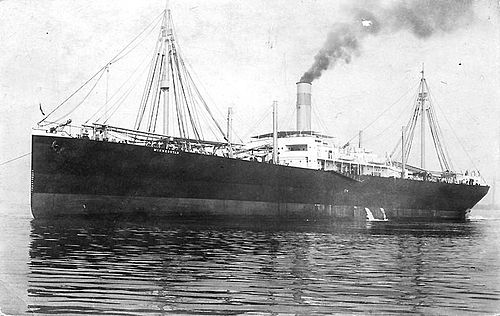 The Wikipedia article of the day for June 8, 2021 is SS Minnesotan.
SS Minnesotan was a cargo ship built in 1912 for the American-Hawaiian Steamship Company. During World War I, she was known as USAT Minnesotan in service for the U.S. Army and USS Minnesotan (ID-4545) in service for the U.S. Navy. She was built as one of eight sister ships, and employed in inter-coastal service via the Isthmus of Tehuantepec and the Panama Canal. In World War I, Minnesotan carried cargo and animals to France from September 1917. After the Armistice, she returned over 8,000 American troops. In 1919, Minnesotan resumed inter-coastal cargo service. During World War II, the ship was requisitioned by the War Shipping Administration and initially sailed between New York and Caribbean ports. In the latter half of 1943, Minnesotan sailed between Indian Ocean ports, and the following year between ports in New York and the United Kingdom, before returning to the Caribbean. In 1949, Minnesotan was sold to Italian owners, who renamed her Maria Luisa R. She was scrapped in 1952 at Bari.