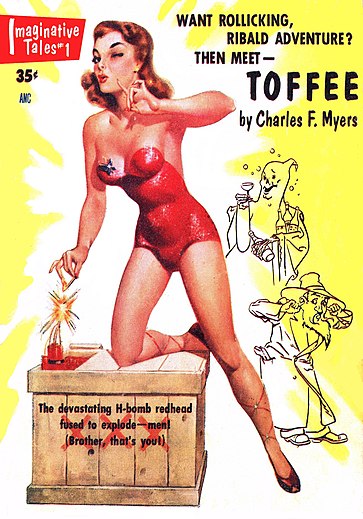 The Wikipedia article of the day for July 5, 2021 is Imaginative Tales.

Imaginative Tales was an American fantasy and science fiction magazine launched in September 1954 by William Hamling’s Greenleaf Publishing Company. It began as a vehicle for novel-length humorous fantasy, with initial issues featuring stories by Charles F. Myers and Robert Bloch. After a year, Hamling switched the focus to science fiction, and it became similar in content to its sister magazine Imagination, publishing routine space operas. In 1958, with public interest in space high, Hamling changed the title to Space Travel, but there was little effect on sales. Magazine circulation was suffering because of the rise of the paperback, and the liquidation in 1957 of American News Company, a major magazine distributor, made it even harder for small magazines to survive. Hamling eventually folded both Imaginative Tales and Imagination in 1958, preferring to invest the money in Rogue, a men’s magazine he had started in imitation of Playboy in 1955.