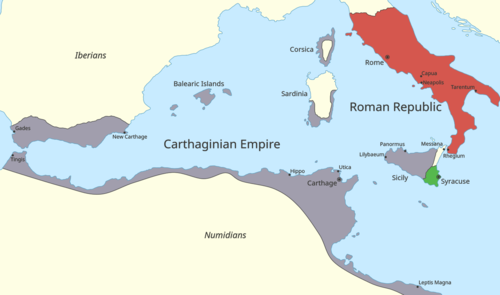 The Wikipedia article of the day for July 7, 2021 is First Punic War.

The First Punic War (264–241 BC) was the first of three wars between Carthage and Rome, the two main powers of the western Mediterranean in the 3rd century BC. For 23 years they struggled for supremacy, primarily on the island of Sicily and its surrounding waters, and also in North Africa. After immense losses on both sides the Carthaginians were defeated. The war began with the Romans gaining a foothold on Sicily. In 260 BC they built a navy to challenge Carthage’s, and inflicted several defeats. Taking advantage of their naval victories, the Romans launched an invasion of North Africa, which failed. In 249 BC they besieged the last two Carthaginian strongholds on Sicily. After several years of stalemate, the Romans rebuilt their fleet and blockaded the Carthaginian garrisons. A Carthaginian fleet attempted to relieve them, but the fleet’s destruction in 241 BC forced the cut-off Carthaginian troops to negotiate for peace. (This article is part of a featured topic: Punic Wars.)