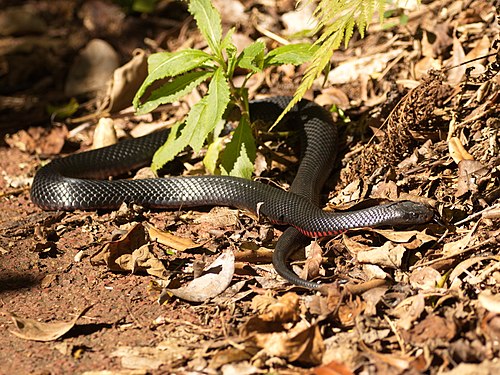 The Wikipedia article of the day for July 9, 2021 is Red-bellied black snake.

The red-bellied black snake (Pseudechis porphyriacus) is a species of elapid snake native to Australia. Described by George Shaw in 1794, it is one of eastern Australia’s most commonly encountered snakes. Averaging around 1.25 metres (4 ft) in length when fully grown, it has glossy black upperparts, bright red or orange flanks and a pink or dull red belly. It generally avoids people, but can attack if provoked. Although its venom is capable of causing significant illness, containing neurotoxins, myotoxins, coagulants and haemolysins, it is less venomous than that of other Australian elapid snakes, and no humans have been confirmed to have died from its bite. The snake forages in bodies of shallow water, commonly with tangles of water plants and logs, where it hunts frogs, its main prey item, as well as fish, reptiles and small mammals. Its numbers are thought to be declining due to habitat fragmentation and falling frog populations.