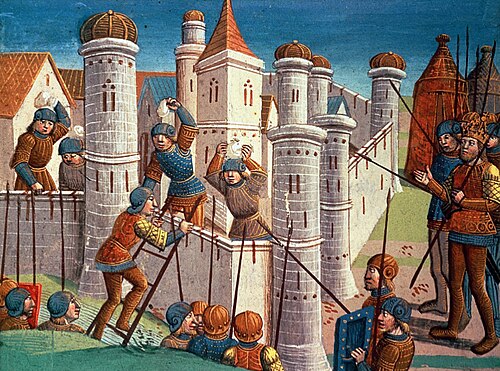 The Battle of Caen on 26 July 1346 was an assault on the French-held town by a force of archers and men-at-arms, part of an invading English army under King Edward III during the Hundred Years’ War. This force, nominally commanded by the Earls of Warwick and Northampton, was eager for plunder, and attacked against orders, before the rest of their army was in position. Caen was garrisoned by 1,000–1,500 soldiers and a large number of armed townsmen, commanded by Grand Constable of France Raoul, the Count of Eu. The town was captured in the first assault; over 5,000 of the ordinary soldiers and townspeople were killed and a small number of nobles were taken prisoner. After sacking the town for five days, the army marched to the River Seine, and by 12 August they were 20 miles (32 kilometres) from Paris. After turning north they heavily defeated the French at the Battle of Crécy two weeks later, and commenced the successful siege of Calais the following week. (This article is part of a featured topic: Crécy campaign.)