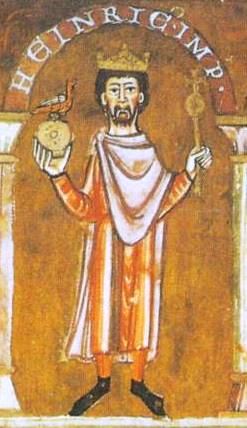 The Wikipedia article of the day for August 7, 2021 is Henry IV, Holy Roman Emperor.

Henry IV (11 November 1050 – 7 August 1106) was Holy Roman Emperor from 1084 to 1105. After his father’s death in 1056, Henry was placed under his mother’s guardianship. Archbishop Anno II of Cologne kidnapped him in 1062 and administered Germany until he came of age in 1065. Ignoring the ideas of the Gregorian Reform, Henry insisted on the royal prerogative to appoint bishops in his German and Italian realms. The Investiture Controversy culminated when Pope Gregory VII excommunicated Henry in response to Henry’s attempt to dethrone him. Henry carried out his penitential Walk to Canossa in 1077 and Gregory absolved him. Henry’s German opponents ignored this absolution and elected an anti-king. Most German and northern Italian bishops remained loyal to Henry and elected the antipope, Clement III, who crowned Henry emperor in Rome in 1084. His son, Henry V, forced him to abdicate on 31 December 1105.