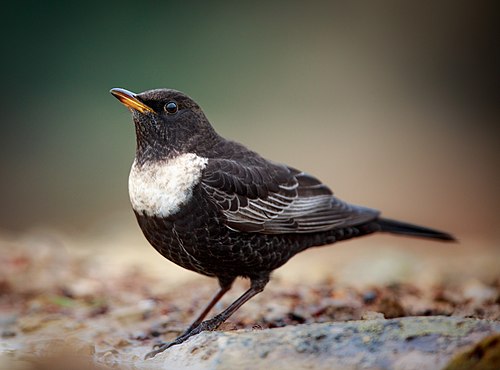 The Wikipedia article of the day for August 14, 2021 is Ring ouzel.

The ring ouzel (Turdus torquatus) is a medium-sized thrush, breeding mainly in Europe. Males are mostly black with a white crescent across the breast, females are browner and duller than males, and young birds may lack chest markings. A high-altitude bird, it breeds in open mountain areas with some trees or shrubs, often including heather or juniper. It is migratory, wintering in southern Europe, northern Africa and Turkey, often in mountains with juniper. A typical clutch of three to six brown-flecked pale blue or greenish eggs is incubated by the female and hatches after 13 days. The downy chicks fledge in another 14 days. The thrush is omnivorous, eating invertebrates, particularly insects and earthworms, some small vertebrates, and a wide range of fruit. Most animal prey is caught on the ground. With an extensive range and a large population, the ring ouzel is evaluated as a least-concern species by the IUCN. There are declines in several countries, perhaps due to climate change or human disturbance.