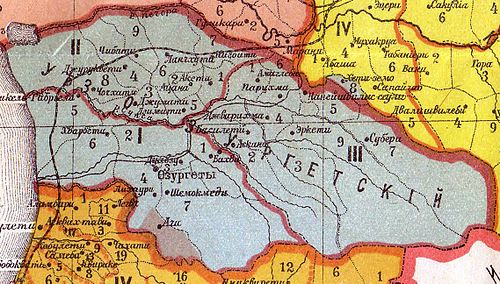 The Wikipedia article of the day for August 18, 2021 is Gurian Republic.

The Gurian Republic was an insurrection and protest movement in the western Georgian region of Guria between 1902 and 1906, against the Russian Empire. It arose from a revolt over land grazing rights; taxation, land ownership and economic factors were also concerns. The Republic established its own system of government, although it was not anti-Russian, desiring to remain within the Empire. The 1905 Russian Revolution led to uprisings throughout the Empire, including Georgia, and in reaction the imperial authorities deployed the military to end the rebellions. The peasants were able to fend off a small force of Cossacks, but overwhelming military force was used to re-assert control in 1906. Some of the Republic’s leaders were executed, imprisoned or exiled, but others later played prominent roles in the 1918–1921 Democratic Republic of Georgia. The Gurian Republic demonstrated that peasants could participate in the socialist movement, an idea previously downplayed by leading Marxists.