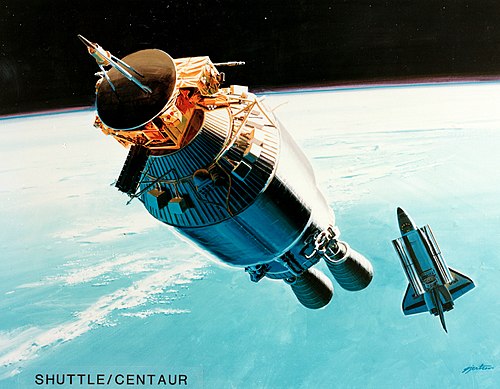 The Wikipedia article of the day for August 20, 2021 is Shuttle-Centaur.

Shuttle-Centaur was a version of the Centaur upper stage rocket that could be carried aloft inside the Space Shuttle and used to launch satellites into high Earth orbits or probes into deep space. Two variants were produced: Centaur G-Prime, to launch robotic probes to Jupiter; and Centaur G, for use with US Department of Defense Milstar satellites and the Magellan Venus probe. Its power allowed for heavier deep space probes, prolonging the operational life of the spacecraft. The US Air Force agreed to pay half the cost of Centaur G. The Space Shuttles Challenger and Atlantis were modified to carry the Centaur. After the Challenger accident, NASA concluded it was too risky to fly the Centaur on the Shuttle, just months before its first scheduled flight. The Galileo and Ulysess probes were ultimately launched using the less powerful Inertial Upper Stage. A variant of the Centaur G-Prime was mated with the Titan rocket to produce the Titan IV, which placed 16 military satellites in orbit.