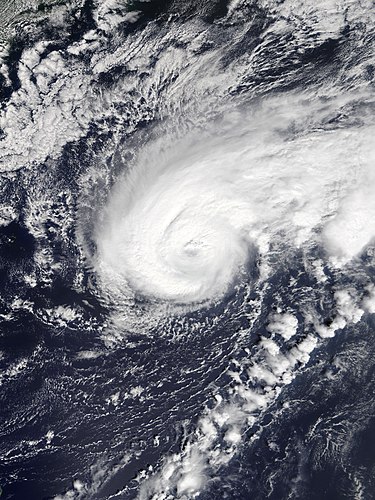 Hurricane Humberto was a large and powerful tropical cyclone that caused extensive wind damage in the British Overseas Territory of Bermuda during September 2019. It was the eighth named storm and third hurricane of the 2019 Atlantic hurricane season. Humberto formed on September 13, then paralleled the eastern coastline of Florida until September 16, when it turned sharply northeastward and became a hurricane. It reached peak intensity as a Category 3 hurricane on September 18. After its center passed within 65 miles (100 km) of Bermuda on September 19, the storm transitioned the next day to a potent extratropical cyclone. Rip currents killed one person in Florida and another in North Carolina. In Bermuda, peak surface winds of around 110 mph (180 km/h), with higher gusts, caused widespread damage to trees, roofs, crops, and power lines. About 600 buildings had roof damage, and L.F. Wade International Airport and the Bermuda Weather Service campus suffered property damage.