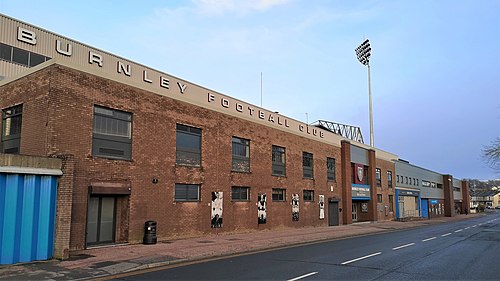 The Wikipedia article of the day for September 23, 2021 is Turf Moor.

Turf Moor is an association football stadium in Burnley, Lancashire, England, which has been the home of Burnley F.C. since 1883. This unbroken service makes Turf Moor the second-longest continuously used ground in English professional football. The stadium is situated on Harry Potts Way, named after the manager who won the 1959–60 First Division with the club, and has a capacity of 21,944. The Turf Moor site has been used for sporting activities since at least 1843, when Burnley Cricket Club moved to the area. In 1883, they invited Burnley F.C. to use a pitch adjacent to the cricket field. A grandstand and terraces were added in 1885. During the 1990s, the Longside and the Bee Hole End terraces were replaced by all-seater stands following the recommendations of the Taylor Report. The stadium’s record attendance was set in 1924, when 54,775 people attended an FA Cup third round game between Burnley and Huddersfield Town.